OUR FEAR OF FAILURE 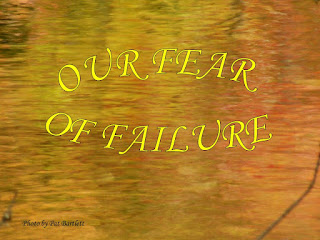 We fear failure. No one wants to work without results, to serve to no end. We set goals, but we face many goal blockers in ministry, which can lead to the fear of failure. Paul, too, feared working in vain (κενός - Phil. 2:16; 1 Thess. 3:5; Gal. 2:2) or for nothing (εἰκῇ - Gal. 4:11). But what does failure look like? Do we measure failure by declining attendance as people go to other churches? Failure for Paul was not that someone would attend another gospel-preaching church but that the two churches would not be united by the true gospel. Paul writes that he submitted the gospel he preached to the elders of the church in Jerusalem "for fear that I might be running, or had run, in vain" (Gal. 2:2). There can only be one gospel that we preach lest grace is nullified and the church divided.

Paul uses one of his favorite metaphors for Christian service. Ministry is a race. We run the race to complete the mission. The only reason to run a race is to get to the finish line. Twice Paul uses the verb to run. The first time he uses the present tense, "I am running" (τρέχω) and the second time he uses the same verb but in the Aorist tense, "I had run" (ἔδραμον). Paul shares his anxiety that he is running, or has run, the race of ministry "in vain" (εἰς κενὸν). This fear is what drove him to go to Jerusalem to meet the elders of the church. The adjective "vain" (κενὸν) means without reaching its goal or without result (BAGD, 427). Paul feared that he would run the race of ministry without reaching his goal in ministry.

The phrase "for fear" is not in the text. The NASB translation supplies it to make sense of the sentence. The conjunction is literally "lest somehow" (μή πως) "I am running or had run in vain." The conjunction generally expresses purpose following verbs of apprehension or anxiety. In this case, the verb must be supplied from the context (BAGD, 519). The ESV brings out the purpose by translating it "in order to make sure I was not running or had not run in vain."

The negative particle (μή) as an expression of apprehension indicates that something can still be stopped when used with a subjunctive verb. When used with an indicative verb, the time for stopping has passed (Blass/Debrunner, Grammar, 188). The first verb translated "run" (τρέχω) could be either subjunctive or indicative while the second verb translated "had run" (ἔδραμον) is indicative. It is probably best to take the first verb as a subjunctive (Burton, Galatians, 73-74). Paul was seeking to alleviate his concern while there was still time to avoid failure. He can do nothing about the race he has already run. Paul's anxiety is that he doesn't want to continue to run his race without results. His purpose in communicating the gospel with the Jerusalem church was to avoid failure in ministry.

What, then, would be the failure he seeks to avoid? I don't think that Paul feared that his message was wrong. Such a view would run counter to Paul's whole argument in Galatians. Paul knew that his message - the gospel - was true. He did not need the elders to validate his message for him. Paul's concern was that they would undermine the unifying nature of the gospel. The fear that drove him to consult the apostles was that the unity of the gospel would be nullified by their insistence that Gentiles follow the Mosaic Law. Such a view of the gospel would end up separating or dividing Jews from Gentiles in the church(Longenecker, Galatians, 49). The gospel of grace would be nullified by works. Paul's whole ministry centered around the bringing together of Jews and Gentiles into one body because of the gospel (Eph. 2:11-22).