THE TESTIMONY THAT HONORS GOD 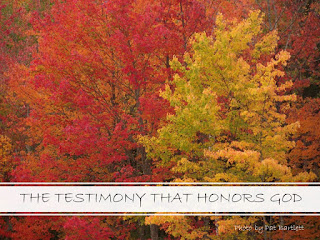 Testimonies are powerfully persuasive expressions of faith when centered on God, not self. Sadly, many testimonies in the church today, especially celebrity testimonies, subtly focus on the person more than on God. Paul's testimony is powerful because it is God-centered, not man-centered.

"They kept hearing, 'the one who once persecuted us is now preaching the faith which he once tried to destroy.' And they were glorifying God because of me" (Gal. 1:23-24).

The Judean churches did not know Paul personally, but they knew his reputation. Paul writes, "they kept hearing" (ἀκούοντες ἦσαν) about him. The antecedent would be "the churches of Judea" (vs.22). The word for "churches" is feminine plural (ἐκκλησίαις) while the participle "hearing" (ἀκούοντες) is masculine plural. The masculine plural can refer to a feminine plural collective noun to emphasize the personal members of that collective. The members of the churches kept hearing about his testimony (Blass/Debrunner, Grammar, 74; Longenecker, Galatians, 41). The periphrastic construction (participle with an imperfect tense verb) indicates durative action. They kept hearing about him. This was not a singular statement but an ongoing testimony of praise (Moule, Idiom Book of NT Greek, 17).

What follows is a direct quote. The particle "that" (ὅτι) is recitative, meaning that it should not be translated (Burton, Galatians, 64). The particle is like our quotation mark. Since Galatians is one of the earliest books of the New Testament to be written, this quote would be one of the earliest statements we have from the first century church! Notice that Paul is not even named in the testimony. The subject is anonymous, although obviously Paul. The testimony is about "the one who once persecuted." Paul knows that the testimony is not about him. It is about what God did to and through Him. A testimony that honors God is not about us but about how God changes us. The present participle "persecuted" (διώκων) refers to a time antecedent to the present time and action that was continuous (Robertson, Grammar, 892; Turner, Grammar, 80-81). Paul once had been persecuting the Christians repeatedly, and that former constant persecution makes the testimony all the more powerful.

The one who formerly persecuted the church now preaches the faith (εὐαγγελίζεται τὴν πίστιν). "The faith" (τὴν πίστιν) refers to the content of the gospel. Paul uses "the faith" in a similar way elsewhere in Galatians (3:23,25; 6:10). He makes the connection between gospel and faith more explicit in Philippians 1:27 when he writes, "the faith of the gospel" (τῇ πίστει εὐαγγελίου). The testimony brings out the force of this connection by emphasizing that "the faith" is the same faith he once "tried to destroy" (cf. Gal. 1:13). The phrase translated "tried to destroy" is another periphrastic (ἥν ἐπόρθει) indicating continuous action. The tense is conative, indicating that Paul had been attempting to exterminate the faith (Burton, Galatians, 64). The testimony of the Judean churches was that Paul was preaching the very same gospel that they believed and which he once opposed.

The result is that "they were glorifying God" (ἐδόξαζον τὸν θεόν) "in me" (ἐν ἐμοὶ). The verb "glorifying" is an imperfect tense indicating durative action. They did not merely honor God once but continuously because of how God turned the persecutor into the preacher. The prepositional phrase "in me" should be understood as the basis or ground of action and can be translated "because of me" (Longenecker, Galatians, 42). The word order emphasized "because of me" by placing it between the verb and the object. "They were glorifying, because of me, God!"

Here should be the goal of every testimony. My desire should be for others to honor God because of me. I should be delighted to be diminished if God be elevated. A testimony that honors God is continuous, not momentary or fleeting. It avoids focusing on me but is gospel-centered. Such a testimony is all about what God does in me, not what I do for God. Only if others celebrate God when they remember me, will my testimony have eternal value.

Posted by David Christensen at 10:53 AM