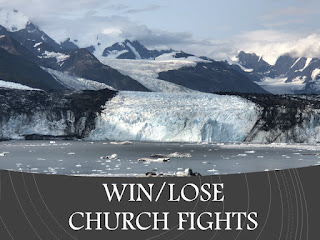 Not all church conflicts should seek win/win results. Some church fights must be win/lose! You are either on the right side or the wrong side, but there is no middle ground. The issue carves a dividing path like a glacier between truth and error, life, and death. The "Great Circumcision Debate" was one of those issues in the early church. Paul has been addressing this debate in the autobiography of his battle for the gospel (Galatians 1-2). The early church was dividing over the issue of circumcision, but Paul did not seek a win/win solution where both sides could save face. Paul drew a hard line that demanded a choice. It was a win/lose fight for the heart of the gospel.

"But it was because of false brethren secretly brought in, who had sneaked in to spy out our liberty which we have in Christ Jesus, in order to bring us into bondage. But we did not yield in subjection to them for even an hour, so that the truth of the gospel would remain with you" (Gal. 2:4-5).

A TIMELINE OF THE FIGHT

Scholars debate the sequence of events in Galatians 1-2 and how they align with Acts 11-15. The critical interpretive decision revolves around whether the infiltration of error mentioned here took place at the Jerusalem Council (Acts 15) or before the council (between Acts 11-15). I am convinced that this conflict started before the council, but you can read an alternative argument by Herman Ridderbos (The Epistle of Paul to the Churches of Galatia in NICNT, 75-92). F.F. Bruce explains the best timeline for the "Great Circumcision Debate" (Galatians, 106-134).

The rumblings of the fight began early in the growth of the church, and the battle plays out over time. People are not consistent, so the skirmishes between the sides go back and forth between compromise and division. Leading figures like Peter and James become enmeshed in the conflict with some embarrassing results (Gal. 2:11-14). Here is a summary of connections between Galatians 1-2 and Acts 11-15 (see Witherington, The Paul Quest: The Renewed Search for the Jew of Tarsus, 309-319).

In this reconstruction of events, Galatians 2:4-5 are a parenthesis in his autobiography, and he picks up with the story of his famine visit to Jerusalem in verse 6 (Acts 11:27-30). What this sequence shows us is that the battle for the gospel was not one event but many. It took place over several skirmishes and compromises. For example, Peter's compromise took place after he had already validated Paul's message in Jerusalem (Gal. 2:9). Paul argues that the promoters of circumcision spied out and infiltrated the churches posing as respected church leaders from Jerusalem to the church in Antioch and the churches of Galatia that Paul established on his first missionary journey.

Paul will have none of it. He calls these religious leaders in the early church "false brothers" (Gal. 2:4).  He says that they are "accursed" (Gal. 1:9) because they "nullify grace" (Gal. 2:21). If we have to do anything to become Christians, including the Law of God, then Christ died needlessly! Adding requirements to the gospel is a form of "bewitching" (Gal. 3:1) because it confuses and controls people by the dictates of religious leaders. Adding circumcision to the gospel means that the person has been "severed from Christ" and "fallen from grace" (Gal. 5:4). Paul suggests that these circumcisers go and "mutilate themselves" (Gal. 5:12). Harsh words for a serious fight! There can be no middle ground. We are either saved by grace plus nothing, or we are not. We place our faith in Christ alone, or our faith is in vain.

Adding requirements to become a Christian nullifies grace and minimizes the cross. Religion has always sought to add elements to the gospel to make people Christian. Requiring baptism to become a Christian or mandating the Eucharist to be saved are adding to the gospel just as much as adding circumcision. We must not compromise through additionalism. Performing good works as penance before God is adding to the gospel. The gospel of Christ is clear. It is about what Christ has done for us on the cross, not what we do for him in the church. We accept by faith what He has done, and He, in His grace, redeems us for His kingdom. If my salvation depends on something I do rather than what He has done, then Christ's work is insufficient for my salvation.

The gospel is a win/lose fight. There can be no compromise!
Posted by David Christensen at 11:19 AM