OUR BEST BEFORE GOD 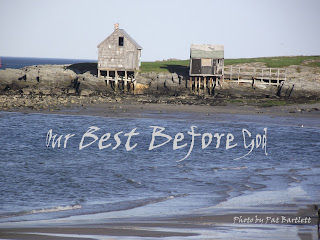 How can humans be accepted by God? Can our best efforts gain God's favor? Every church faces the temptation to slide into practical Pelagianism - measuring righteousness by the best we can do apart from God's enabling grace. Subtly, a performance mentality seeps into our church life even as we preach Christ's gospel. Do we earn God's approval by what we do, or does God grant His acceptance because of what He has done?

Three vital theological terms leap out of the text: "justified" (δικαιόω), "law" (νόμος) and "faith" (πίστις). All three terms are significant in the vocabulary of Paul and central to his argument in both Galatians and his longer epistle, Romans. Few words have been analyzed by theologians more frequently than justification producing an indisputably clear meaning. The term does not refer to moral causation. It is judicial and forensic in essence. God does not make us righteous in justification. He declares us to be right. Justification carries a sense of God's acceptance and approval. Since God's acceptance of us is not based on our merits but on His work, our righteousness can rightly be said to be God's righteousness (Burton, Galatians, 460-474).

The term "justified" occurs three times, and each time it is passive. We do not justify ourselves but are justified by another. God declares us right as we stand before Him. The first verb is in the present tense (δικαιοῦται), indicating an ongoing truth. The negative with the present tense tells us that justification can never be achieved by the observance of the law (R&R, Linguistic Key, 506). The second verb is an Aorist subjunctive (δικαιωθῶμεν) teaching that justification is a general truism. The third use of the term is in the future tense (δικαιωθησέται). Nobody will ever be justified by the works of the law. Paul has covered all the time zones to make his point.

Three times in this one verse, Paul tells us we are not justified "by the works of the Law" (ἐξ ἔργων νόμου). The preposition "by" (ἐξ) emphasizes the source of our justification. Paul did not have a convenient term like "legalism" to describe the issues he faced, so he used this expression to make his point. Legalism is any attempt to justify oneself by obedience to the law (Bruce, Galatians, 137). "Law" is in the genitive case. I don't think it is a subjective genitive as if the law can produce the works. It is an objective genitive meaning that the object of our works is the law. We choose to do what we think will fulfill the law to justify ourselves (Meyer, Galatians, 85).

Unfortunately, the NASB mistranslates the phrase as "the works of the Law," capitalizing law to identify it as the Mosaic law. Both "law" and "works" are anarthrous and should be translated "works of law." Paul is not talking just about "the Law," a specific code of conduct revealed through Moses. He is talking about divine law in general, all that is in accord with the character and will of God. Without the article, Paul stresses the qualitative nature of God's law. Paul expands his thought in Romans where he uses the same clause "works of law" to describe the Gentiles who are accountable to God's law without possessing the Mosaic Law (Rom. 2:11-16; cf. 3:20, 28). All attempts to curry God's favor by law-keeping, whether written or unwritten, do not work (Burton, Galatians, 120, 443-460).

Religion's temptation is to drift toward works righteousness. In our pride, we determine to control our destiny by what we do instead of accepting what He has done. We develop selective righteousness in our churches as a means of quantifying holiness - an unwritten code of conduct. A performance mentality grips our faith as we parade our works of law before God and others.

Lord, root out in me any subtle seepage of pride that trusts my works over your work, my achievements over your sacrifice.
Posted by David Christensen at 9:28 AM