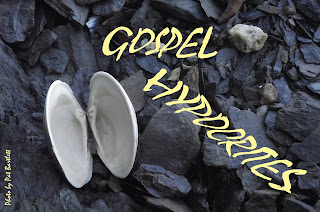 Hypocrite: A person who pretends to be something he/she is not, two-faced.

"The rest of the Jews joined him in hypocrisy, with the result that even Barnabas was carried away by their hypocrisy. But when I saw that they were not straightforward about the truth of the gospel, I said to Cephas ..." (Gal. 2:13-14).

We get our English word "hypocrite" from the Greek word used here. Paul uses two related words, a verb and a noun, to stress the hypocrisy of Peter. The verb "joined him in hypocrisy" (συνυπεκρίθησαν) meant to join with others in pretending (BDAG, 793). The noun "hypocrisy" (ὑποκρίσει) meant to put on an outward show, a pretense (BDAG, 845). The root meant to "answer from under" (Burton, Galatians, 108) and referred to actors who spoke from behind a mask. The actor's job was to explain the drama by playing a role so that everything he did was in keeping with his character in the production (TDNT, 8:559-560).

In classical Greek, the words did not necessarily imply a negative meaning. The hypocrisy could be positive. Other descriptive words were necessary to determine whether the hypocrisy was negative or positive. However, within Judaism, the term is negative. It is sin. The Septuagint used the word in connection with apostasy. A hypocrite was someone who only pretended to follow God's law until it became inconvenient and then turned away from God's truth. The venerated Maccabean leader, Eleazar, said he would choose death rather than hypocrisy, which he viewed as apostasy (2 Maccabees 5:25). The Septuagint often used the word "hypocrite" (ὑποκρίτης) to translate a Hebrew word that meant a wicked or ungodly person. Paul's use of the term reflects this Jewish background. Hypocrisy has to do with denying the truth of the Gospel (TDNT, 8:562-569).

Peter wasn't merely being socially two-faced. He was denying the gospel - apostasizing! Apparently, both Jewish and Gentile Christians were in the habit of eating meals together in the church at Antioch. These social gatherings were reflections of the transforming power of the gospel, making the church one new man in Christ (Eph. 2:11-16). Peter gladly ate with them until the Jews from the church in Jerusalem arrived. He withdrew from the Gentiles to eat only with the Jews, and, in so doing, led the other Jewish Christians to join him. Paul viewed this correctly, not merely as a social failure, but as a corruption of the gospel itself. Peter was a hypocrite. He was pretending to be what he was not in Christ.

The sad reality is that Peter led Paul's trusted missionary partner and friend, Barnabas, astray (συναπήχθη). The word means to be carried off (BDAG, 784). Peter's hypocrisy carried Barnabas into hypocrisy. The word "hypocrisy" is in the dative case and could be either a dative of accompaniment or dative of agency. In other words, Barnabas was either swept along with Peter's hypocrisy, or he was influenced by Peter's hypocrisy (Burton, Galatians, 109). Either way, he, too, denied the truth of the gospel.

How Barnabas' hypocrisy must have stung Paul. Barnabas had been the first to welcome Paul into the church. Barnabas and Paul had planted churches in southern Galatia on their first missionary journey enduring hardship and struggle together for the gospel. They would not be partners on Paul's second missionary journey. Luke states that the break up of their partnership occurred over John Mark (Acts 15:36-41). However, this episode in Antioch may well have factored into the fracture. F.F. Bruce suggests that the dispute over John Mark would not have been enough to break up the team, but for this more serious matter (Bruce, Galatians, 132). The hypocrisy of Barnabas eroded Paul's trust in his partner. Their close relationship came to an end not long after this event in Antioch.

The gospel proclaims that there are no racial, social, cultural, ethnic, and gender barriers (Gal. 3:28-29). It is the great equalizer. All people stand equally at the foot of the cross as one in Christ. Gospel hypocrites pay lip service to this transforming truth, but their partisan lifestyles belie the good news they preach.

Lord, keep me from becoming a gospel hypocrite. Show me those attitudes and actions that, however unwittingly and subconsciously they might be, deny the gospel I preach. Convict me to repent of any self-deluded rationalizations I might use to justify my behavior. Energize me to live what I preach.
Posted by David Christensen at 8:57 AM