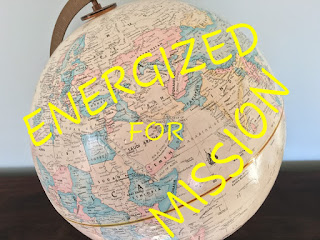 Christ commissioned His church to carry out a global mission. The strategy of the early church was to divide and conquer. Christ entrusted the gospel to Paul to reach the uncircumcised while He commissioned Peter to lead the mission to the circumcised (Gal. 2:7). We (the modern church) follow in their footsteps to fulfill our mission to reach the world for Christ. Not only did Christ call the church to a global mission, but God also energized the church to carry out the mission. Paul wrote, "for He who effectually worked for Peter in his apostleship to the circumcised effectually worked for me also to the Gentiles" (Gal. 2:8).

Paul uses the same word twice to make his point. First, the Aorist participle is translated "the one who effectually worked" (ἐνεργήσας). Then the Aorist indicative is used (ἐνήργησεν). The intransitive use of the verb means to be at work, to operate, or be effective. The transitive use of the verb means to produce results. In either case, the preposition "to" (εἰς) is used to introduce the goal or objective of the work (BDAG, 265). God, not Christ, is most likely the subject of the verbs in keeping with the other passages where this verb is used (1 Cor. 12:6; Phil. 2:13: Col. 1:29; Meyer, Galatians, 70). God, not us, makes our mission effective. We depend on God's power to drive the success of our mission. He produces the results of our gospel mission.

The fundamental exegetical question is this: Does God qualify them for the office of apostle, or does God accomplish His mission through them? If the verb is used intransitively, Paul could mean that God was making them fit for their apostleship. If the verb is used transitively, Paul would be saying that God produced the results (the converts) of their mission. Either view is theologically valid and exegetically possible. What is the sense that Paul intends by his use of "effectively worked" in this context?

The indirect object is personal in both cases. The datives "for Peter" (Πέτρῳ) and "for me" (ἐμοὶ) are datives of advantage indicating that God worked for the benefit of Peter and Paul. The object of the preposition in the clause about Peter is "apostle" (εἶς ἀποστολὴν) indicating that the act of making effective had to do with his apostleship to the circumcision. God was endowing Peter to be an apostle, qualifying him for his position.

2. To accomplish the mission of the gospel (Meyer, Galatians, 96).

God was not just making them fit for their position, but Paul intended to point to the entire efficacious work of God in carrying out His calling for their lives. Paul is using the word to mean produce results, not merely make them fit for the job. In the second clause, Paul does not use the word "apostle," and the preposition focuses on the goal of reaching the Gentiles. This would imply that the effective work of God was not limited only to apostleship but to the results of the broader mission.

I think view #2 brings out the force of the passage. Paul's use of this term elsewhere adds support for the fact that God energizes the mission - God produces results. The verb is used for the power that raised Christ from the dead (Eph. 1:20; Col. 2:12). The preaching work Paul did was by the energizing power of God (Col. 1:29). The Word of God is not only living but effective (ἐνεργὴς) in judging the hearts of people (Heb. 4:12). The works (ἐνεργημάτων) we do as members of Christ's body, we do because God energizes (ἐνεργῶν) us to do them (1 Cor. 12:6). The Spirit of God works (ἐνεργεῖ) all things in each of us according to His will (1 Cor. 12:11). "For it is God who is at work (ἐνεργῶν) in you, both to will and to work (ἐνεργεῖν) fo His good pleasure" (Phil 2:13). God energizes us for His global mission.


Make us, Lord, dependent servants who trust in your effective power to accomplish your great mission in this world.


Posted by David Christensen at 1:48 PM